51 kg (112.4 lbs)
Souichi Tsujii is the main character of many of the short stories in the Junji Ito Collection Manga, and is featured in the new Junji Ito Collection anime. He is usually seen biting iron/steel nails in his mouth due to the lack of iron in his body. Like many of Junji Ito’s antagonist characters, Souichi is known for his schemes, though many of them backfire in comedic and ironic ways.

He insists that he was born on June 6, at precisely 6:06 and 6 seconds, though his actual birthday is May 3. An eccentric oddball of an 11 year old, Souichi specializes in voodoo and enjoys causing havoc against people he doesn't like. Despite the dark nature of his actions, Souichi is shown to be childish, spelling things wrong or mistaking words, reminding us that he's still only 11. Souichi apparently suffers from anemia—as a result, he is almost always seen chewing iron nails in his mouth and sometimes makes them look like teeth. He dislikes his older brother Koichi and cousin Michina, and often tries to scare them and his sister Sayuri.

As an adult, he somehow masters high level of dark magic as he now can generate nails from his mouths and put a binding spell to turn his family into hideous figures to do his bidding in his haunted house business. At the same time, he marries Miss Fuchi and fathers a son who is a cannibalistic monster just like his mother. Due to his wife's terrifying personality, he has to live a nomadic life to get away from her as he goes from town to town opening haunted houses to get away from her. Eventually, his wife tracks him down and drags him away with her whilst threatening to kill him if he leaves her and their son again.

Souichi is cunning and specializes in Black Magic. He uses Voodoo Dolls and can harm others by hammering nails into the dolls, which he used once to send someone to the hospital. He can use the Voodoo Dolls in other ways as well, like burying or drowning a person. He can cause others to hallucinate by dropping something on their doll; For example, causing someone to hallucinate a giant spider, due to Souichi dropping a spider toy on their doll. He also can create human sized dolls who are able to talk and move.

He can cause mischief to others simply by cursing them repeatedly. He can bring back the dead to life and change the weather by simply using a curse. He has also stated that he can talk to any doll. His curses seem to have no range limit as, Souichi's curse on his cousin Yuusuke who is in Tokyo, affected him. The amount of curses that Souichi possesses is unknown, though it seems to be large.

He otherwise can generate and shoot nails out of his mouth. 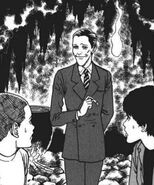 Souichi as an adult

Add a photo to this gallery
Retrieved from "https://junjiitomanga.fandom.com/wiki/Souichi_Tsujii?oldid=6661"
Community content is available under CC-BY-SA unless otherwise noted.